This other scientific programme – whose name was inspired by Voltaire's tale, but which stands for micro-wastes/mega-issues – being conducted in partnership with the Geneva-based Swiss association Oceaneye, will consist of regularly taking seawater samples so as to evaluate plastic pollution levels.

These samples will further facilitate research being conducted by Oceaneye and will be analysed in cooperation with the Central Environmental Laboratory of the Federal Polytechnic University of Lausanne (EPFL). "Fleur de Passion's voyage around the world is a great opportunity to obtain samples from the Atlantic, Pacific and Indian Oceans," explains Pascal Hagmann, Executive Director of Oceaneye. We will thus be able to generate new data to supplement those obtained during our 2011 and 2012 campaigns in the western Mediterranean Sea, and those from 2013 and 2014 obtained in the eastern part of the North Atlantic waste patch. They will pave the way for new studies on pollution in these three oceans, for quantifying the level of pollution and illustrating its true extent. The findings of this plastic pollution mapping will be shared with the United Nations Environment Programme (UNEP). 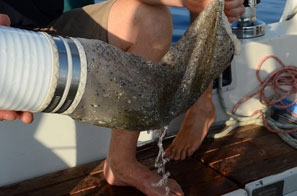